I am excited to announce that Everything Candid has been nominated for a Very Inspiring Blogger Award! This is an award given by bloggers to fellow bloggers who inspire them and thus making the entire blogosphere a dynamic, excited and beautiful place.

Few weeks back in January 2015, Everything Candid received its first ever award nomination by Indrosphere for Very Inspiring Blogger Award! I am indeed very thrilled to find out that someone out there in blogosphere not only reads my blog but finds it inspiring too. Many Many thanks to Indrajit Roy Choudhury of Indrosphere for this award. It means a lot to me and my work. So, a big thank to him for his encouragement and support.

This is a great confirmation of what I’m doing with this blog. My objective from the start was to inspire people to run from safety of everyday life and travel places. In last 8 months of serious and committed blogging, I discovered one earnest community of enthusiastic travel & photo bloggers with big hearts for sharing and inspiring each other passionately. And I want to thank them all for opening up a new world which has given me many reasons to go for my dreams.

So as a part of Award’s rules i am supposed to do the following which is an acknowledgment of accepting the nomination,

Rule One: Display the award and its Rule on your blog 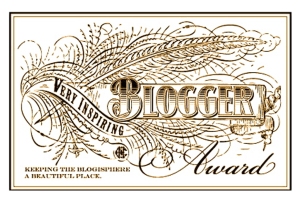 Rule Two: Thank and link the amazing person who nominated you: T

A big big thanks to Indrajit Roy Choudhury of Indrosphere for this inspiration.

Rule Four: Nominate 15 other amazing blogs and comment on their posts to let them know they have been nominated

There are many more bloggers who inspire me but alas I have to mention only 15.

Rule Five which is Optional: Proudly display the award logo on your blog and follow the blogger who nominated you

I have started following Indroshpere and soon display award logo also on my blog.