The first glimpse of Sheikh Zayed Grand Mosque tickles your senses; as you enter the premise, it amuses you; by the time you stand below first dome, you start to feel artistic musings in your spine; while free strolling the mosque, intricate carvings activate your right brain brain, finally when you reach grand hall through corridor, you feel completely jolted with its beauty, magnanimity. It is the best and finest example of Islamic Architecture which can rival Taj Mahal.

The finest example of Islamic Art

Sheikh Zayed Grand Mosque of Abu Dhabi is the finest example of Islamic art as it presents a mixture of Mughal, Moorish, Ottoman and Persian architecture. It epitomized a superlative fusion of traditional Islamic architecture with innovative science of modern designs. With grace and aplomb, it has embraced best of both world which mesmerizes every visitor.

For me, Sheikh Zayed Grand Mosque is a bundle of ecstasy made up of marble which can rival the Taj Mahal, the top wonders of our world. Interesting facts about Sheikh Zayed Mosque makes it a must visit place in Abu Dhabi. It is most visited tourist attraction of Abu Dhabi. In years to come, I believe, it will be voted as the modern wonders of the world.

More than five million people visit this grand place every year to feel the awe inspiring floral mosaics, golden arches, marble domes and vast courtyard, which have earned it the title of world’s third favorite landmark by travel website TripAdvisor for 2018 ahead of Taj Mahal, Great Wall of China and Eiffel Towers.

First impression at the entrance prepares you for something Mughal, however, it much more than that..

A future wonders of the world

Some 400 years back, Shahjahan of Mughal Dynasty, then the richest empire, built Taj Mahal for his lost love and in 1990s Sheikh Zayed charged with heavy flow of petro-dollars decided to create a never seen, never heard of extravaganza of marble. Such building is not possible in a democratic setup of our modern world and someone like Sheikh Zayed, who had the authority and a zeal for writing future history could only dream of building such a grand structure.

Emirates of UAE are known for their craziness about world records of all kinds. With huge cash at disposal, they believe in creating world record which also ensures more tourists for them. Sheikh Zayed Mosque holds two official world records:

The world’s largest carpet, handmade, which is 5627 square meters. Weighing 47 tonnes, this huge carpet is made of over 2.2 billion nodes using wool and cotton under the supervision of Iranian artist Ali Khaliqi who deployed 1,200 specialized artisans of Iran for this project.

The world’s largest hand knotted carpet came from Iran is spread out at Main Prayer Hall complementing the chandelier.

The largest chandelier of the world

The largest chandelier in the world in main prayer hall which is 15 meters high and 10 meters in diameter made in Germany with thousands of Swarovski crystals from Austria and colorful glasswork from Italy.

World’s largest and most delicately designed Chandelier amplifies the beauty of this Mosque. 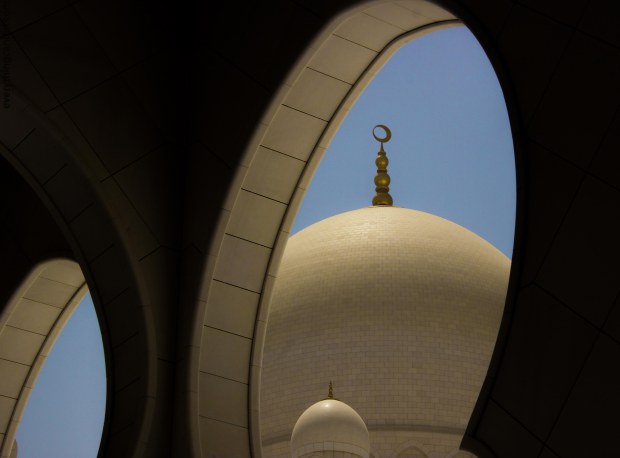 It’s the symbol of faith, harmony, diversity and tolerance 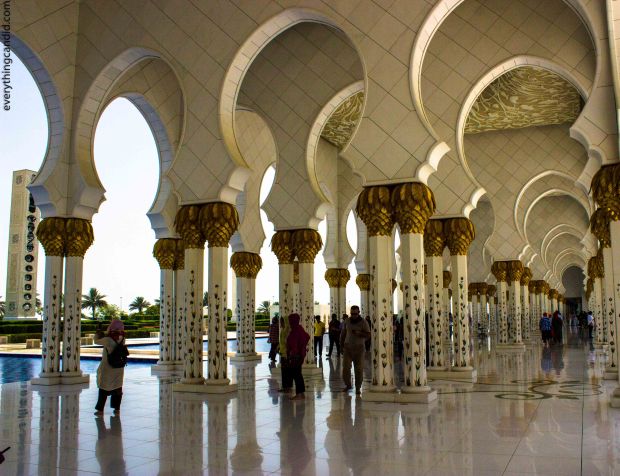 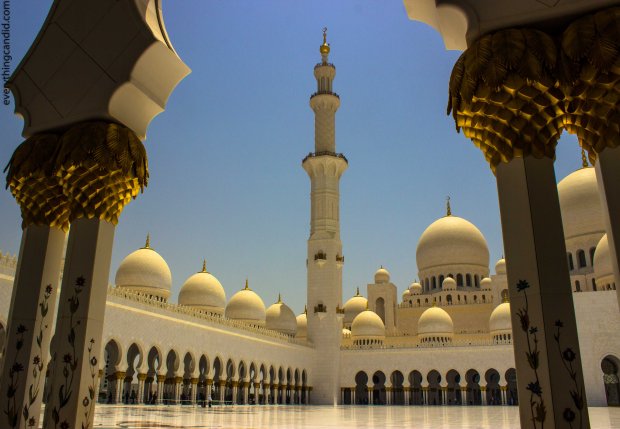 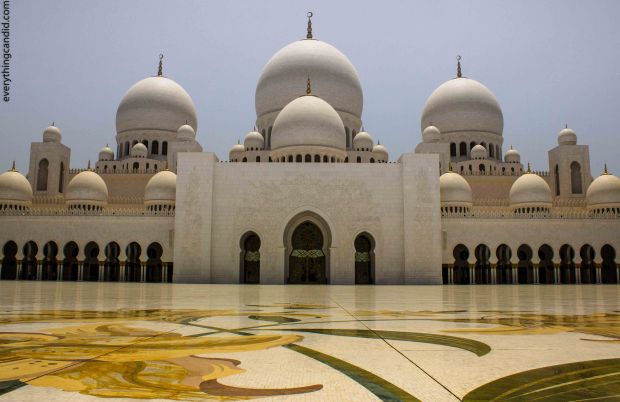 A Brief note on Sheikh Zayed – Father of UAE

The Sheikh Zayed Bin Sultan Al-Nahyan was instrumental in bringing seven Trucial states (Abu Dhabi, Ajman, Dubai, Fujairah, Ras al-Khaimah, Sharjah and Umm al-Quwain) together and establishing UAE after Britishers left in 1968. He created the entity from virtually nothing on December 2 1971 and as President of UAE wrested the cluster of emirates from sleepy backwardness and age old tribal setup transforming it into a modern economic dynamo. Under his stewardship, UAE achieved superlative success and in less than 3 decades after Britishers left become a literal phenomenon of modern world on the backdrop of felicitous discovery of Oil.

Instead of squandering money earned from Oil, he invested in building nation and built a strong set up of good governance and infrastructure. His vision was to create a strong rooted nation which can last longer than the oils in the wells.  Sheikh Zayed had a far reaching vision and a strong determination to reform which earned him the moniker, “Wise man of the Arab” as he cared for whole arab world and faought for their rights in every international forum.

Eid al-Adha Mubarak to everyone across the globe! May Allah bless everyone with happiness, peace of mind, and good health! 🤲

The calmness fell upon the city, while @jessica_simonsen and I wandered along the corridors of the Sheikh Zayed Grand Mosque. What a spectacular place. #24mm

When I first visited Taj Mahal in 1999, it was love at first sight and I was completely sold to the gorgeous and ethereal beauty called Taj Mahal. And, now after 2 decades, again I felt the same overwhelming flow of emotions when I experienced the phenomenon called Sheikh Zayed Grand Mosque.

Sheikh Zayed Grand Mosque embraced me tightly with its charming aura, its grandeur presence and its shining glory. It let the traveler inside me actually achieved Maslow’s self actualization. For times to come, Sheikh Zayed Grand Mosque will have a superlative impact on my psyche as I have never seen anything which is so pristine, so extravagant and so beautiful. Here I could feel the real meaning of being overwhelmed as it is just impossible not to feel overwhelmed by the opulence which oozes from each corner.

Did you every feel such strong overflow of emotions while seeing any architectural marvel. Do share your story from your such experience in the comments below.

If you feel motivated, please share this blog post with your  friends to give them a reason to spare some time from mundane life in exploring the world.