First of all I would like to take this opportunity to thank each and every one of you for the continued support with comments, likes, plusses, tweets, and shares. It has been an absolute pleasure to share my travel stories and photos. I would like you to know that you’ve all helped make 2014 a truly memorable year for me.

2014 turned out to be most incredible year for me which changed my life completely in more than one sense. It let me get closer to myself and in doing so I could realize my most loved dream. The dream where I used to see myself sharing my world touring experiences with others, writing my travel stories, going to unseen places, capturing the might and the beauty of the nature.

When I first saw this dream, it had the classical hue of Sepia color. I say sepia because when I weaved this dream, there was no internet, no mobiles, no DSLRs, no FB or Twitter etc. Life was tad simple and slow paced revolving around the information gained thru morning newspaper, monthly magazines and rented books from libraries. Incidences which facilitated and triggered such dreaming were derived from the stories of Sindbad, Mobidick, Arabian Nights, Around the world in 80 days, Indiana Jones, and much credit must go to a TV Series on DD Surabhi anchored by Renuka Sahane and Siddharth Kak and some credit may also be given to another program Bharath Ek Khoj based on a book by Mr. Jawahar Lal Nehru -The Discovery of India. In those days social network was limited to school, college and colony, however few enlightened souls where a follower of the concept of Pen Friends and Ham Radio too.

Arrival of Channels like Discovery, History, National Geography and TLC changed the color of the dream from Sepia to all color. Impossibilities were more possible and nothing seemed too distant. Vision was more global and path to achieve the dream became rather visible. But then life was also taking its turn and career, professional responsibilities etc became the pivotal point of the life. And thus Dreams of seeing world, and sharing experiences got buried too deeply as if they never existed. Concurrently, the world was seeing epochal change with the advent of Internet and life was never same for the people LIKE ME born in 1980s. Sweeping changes as seen happening in webbed world bring the entire world on the window screen and made the life a cool 24×7 phenomenon. Meaning of everything changed so suddenly that few lost the track and few created new tracks.

Dreaming and realizing the dreams became easier and the door for opportunity opened everywhere which let people go beyond mundane TOWARDS redefining the extremes. And for me 2014 was the time to blow the air full throttle and remove the dust from my childhood dream of living life of adventure, going places, experience multitude and share it with all in my way. It all started while planning for my first off shore trip to Thailand. During my planning phase, I went through a lot of articles and blogs which rekindled ages old fire in me. I became desperate to live my dream and subsequently after few road tripping thus born this blog – Everything Candid, in 2014.

I had tried my hands in the trade of blogging earlier on blogspot but ended up no where. Further, In 2011, I bought Royal Enfield to ride the roads, but could not go for even a single ride till now. Later in 2013, I become little serious and bought a DSLR and became regular in participating Photo Walks organized by Delhi Photography Club. But in 2014, the urge, this time, was too strong and driving idea was based on “NOW OR NEVER” and thus finally started this blog with commitment to make it a part of my life. First real motivation came after I took the membership of Delhi Photography Club this year and got the chance to interact with few Travel Photographers like Justin Rabindra, Idris Ahmed and Aman Chotani that added much required pragmatism to my dream. So, here, I am on the road to discover the world around me and to take candid picture of the world while I’m at it.

Year 2014 has been an incredible year for me as beginner in Travel and Photo blogging space where I’m still learning the tricks of the trade. Thru this post I would like to summarize high-points of my journey in 2014 as a traveler capturing the world candidly and sharing my frames with beautiful people like you all around me.

Triggering of an Itch

While at Pattya beach, I could see innumerable people from different ethnicity and that triggered an Itch in me. The itch that I HAD A DREAM….. While boarding return flight from Bangkok for Kolkata I met a Greek couple who were on a global trotting spree for six months. As they were heading to India so I had a long discussion with them on many aspects ranging from Greek Mythology to Places to Visit in India etc. This meeting made me to think more and more about my buried dream. So I think final trigger to go for my dream took over me in Thailand and laid the road ahead me.

This fellow was riding on a horse cart alone and the greenery all around us was very serene. I stopped there, captured the frame and realized Self Driving Road tripping is all what I want. While at it, I realized I could stop and capture at my will because I was self driving that equipped me with the freedom to keep at it on my pace. It was my moment of truth where I realized I must assimilate my passion to drive with my other passions – Traveling and Photography. And Since then I have clocked around 9000KM going to places like Kinnaur Valley, Kasauli, Shimla, Kullu-Manali, Pithoragarh, Dharchula, Munsiyari, Bikaner, Jaisalmer and my total self driving meter stands at around 23000KM. The self driving to places in 2014 has been thrilling and equally humbling.

3. Self Drive Road Tripping to Shimla and Kasauli 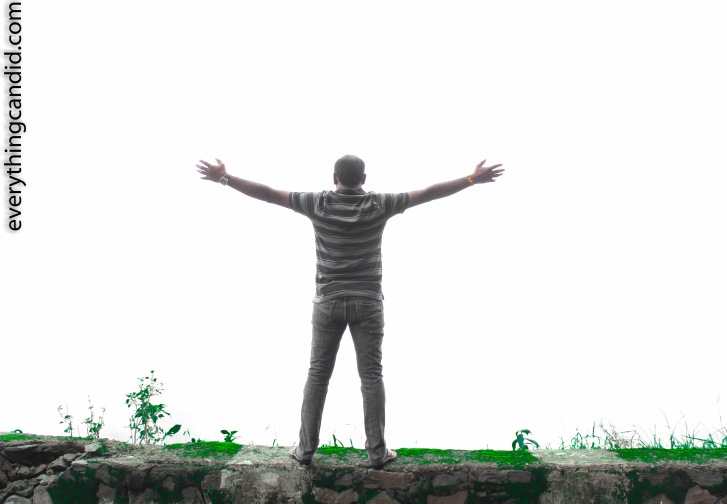 Absorbing the Nature: Getting closer to Dream!

So, finally in August, I embark on my first self drive road trip as a travel photo blogger with an aim to share the world thru my lenses and digital pen. I drove thru clouds amid rains and was complete enamored of entire Chandigarh-Shimla Road. While absorbing the nature and trying to be a part of it, my wife clicked this moment which truly depict the reason of my beingness. This road trip was The Turning Point for me as a blogger which resulted in two serious posts on Bun Samosa of Kasauli and Murthal- The Dhaba Capital. 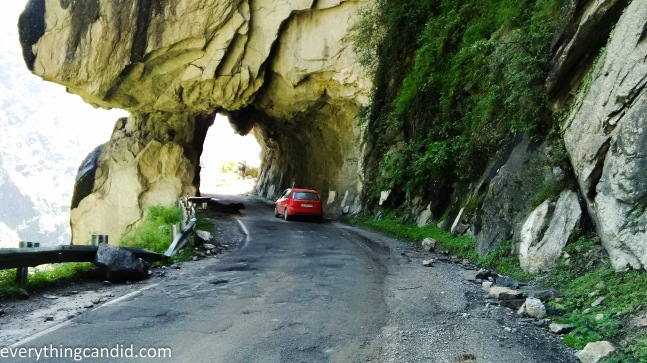 This was an absolute delight for me as photographer, self driver, and beauty seeker. When I reached this place in Kinnaur Valley, I was in complete ecstasy chuckling with happiness like a child. I have seen this in pictures but didn’t knew it’s in Kinnaur Valley, so the excitement was finding my own Eureka Moment. This entire experience made me feel strongly that IT’S ACHIEVABLE. I drove on one of the most dangerous road to Sangla and Chhitkul which gave me the confidence as a self drive road tripper. Entire feeling was as if I have just been fledged. 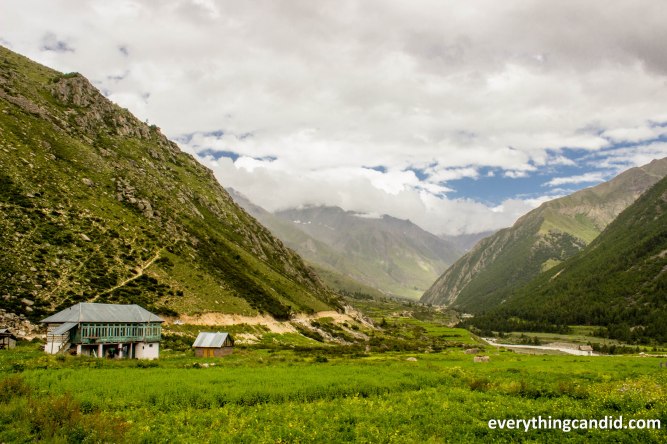 I was simply speechless as soon as I stepped down in this last inhabited village Chhitkul on Indo-Tibet Border. Walk along the Baspa River was so magical that we (My Wife and I) felt like as if we were strolling thru an old classic painting of nature which has all ingredients like Mighty Mountain, Roaring River, Bouldered Road, Clouds etc. The virgin beauty of this village made me realize that world is still full of unexplored places and I must move fast before it’s spoiled. I must say every moment I spent in the village was a Picture Perfect Postcard Moment.

After driving 650KM to this small town Dharchula on Indo-Nepal border, I simply fell in love with this suspension bridge. People from both countries can freely cross over this Kali River which is natural border between two countries. No one can photograph the bridge so I took the photograph from the bridge capturing two countries from one point which actually don’t belong to any nation. Left side is Nepal and Right side is India. It was an incredibly Rarest of Rare Moment.

On my way from Jauljibi to Munsiyari, we came across a group of paddy growers doing it traditionally. In this world where we praise modernity and have forgotten how we have reached so far, such glimpse on traditional way of life are heart touching. The entire settlement which includes wooden houses, Paddy Field and traditional people was akin to an Age-Of-Empire stone-age era setup and for any Age-Of-Empire fan it was a Moment Of Nostalgia.

8. Under the water fall

Higest Moment of My Self Drive ROad Tripping in 2014

I must say I was my most adventurous self drive of 2014, when I decided to took the rarely travelled road to Munsiyari via Jauljibi and Madkot along the river Gauri. This barren road which was full of picturesque scene at each turn was the high point of my Self Drive Road tripping. While passing thru this water fall I could sense a mix feeling of excitement and exaltation which I never felt earlier. A sense of accomplishing and achieving, after all finally I was on the path towards realizing my dream. I was doing things rarely done earlier, capturing beauty of the nature from unexplored points a Bingo Moment for me. 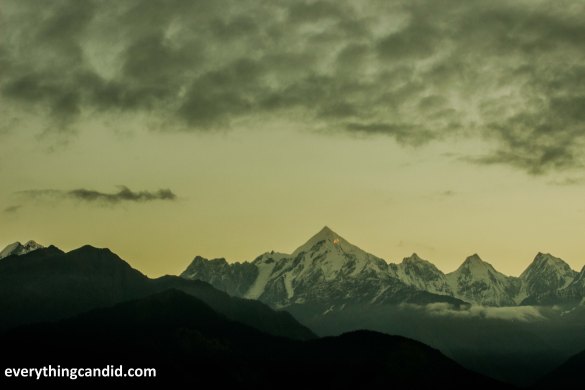 Panchachuli is the most pictured Himalayan range from India. One can capture it from many places in Uttaranchal. Munsiyari gives the closest and open view of this range of five peaks. Clicking sunrise from Munsiyari was the most picturesque golden moment of the year. We waited for sunrise for approx 30 mins and when it finally beamed on Panchachuli I was really in a dilemma whether to capture it thru eyes or lense. May god bless me with more such Moments of Dilemma in life!

In November, I traveled 12 KM deep in Thar Desert from Bikaner for a night campaign on a sand dune. Desert safari & Camel Ride were the thrilling part of the expedition and clicking the sunrise and sunset was like experiencing the awesomeness of nature. The scene left me stunningly speechless with the surreal beauty of Sun amid the vastness of Thar Desert. It, however, was the vastness which was spread before me that completely humbled my existence. It was truly a Moment of Truth for me which made me feel modest and humble, for nature has many color and I have seen a few.

I must conclude this post with a thank to few bloggers I drew daily motivation from. They are really my role model from blogosphere and source of inspiration who rekindle the fire in me to go for my dream:

Stay Candid and Be You!!

19 thoughts on “10 Incredible Moments of 2014: Making Of A Travel Photo Blogger”