Golden Temple, also known as Harminder Sahib or Darbar Sahib, in Amritsar is the center of Sikhism across globe and is considered most sacred in all of the Sikhism. Amritsar means “a lake of divine nectar- the drink of the Gods” for it has a sacred pond / lake which houses the holiest of all Gurudwaras, the gilded one – the Golden Temple. The city of Amritsar grew around this man-made lake (sarovar) and the temple in the middle was built by Gurus; attacked, looted and demolished by invaders; and rebuilt by kings and devotees many times in last 500 years. The imposing fortress like temple complex is a place of sacred beauty, ethereal spirituality and sublime peacefulness having the power to transform anyone internally for eternity.

I have visited Golden temple and Amritsar umpteen times. Amritsar, with its ages old history, culture and heritage, is a City of Antiquity for me as its lanes and by lanes effuse distinct vibes same as those emanate from ancient cities like Delhi, Varanasi, Bagan etc. It has so much hidden inside its womb that makes it a must visit Indian city of North India. After completing my road trip to Dalhousie and Khajjiar last year, I made an impromptu decision to stay in Amritsar and visit golden temple again. Only issue was to get a nice hotel to stay as i was traveling with my wife and our two years old son. Fortunately, there are many best luxury hotels in Amritsar which could be booked using new age travel booking apps.

My reasons to visit Golden Temple

In India, which the land of religions, there are many temples but, for me, none is as grand and magnificent as the Golden Temple. Irrespective of religion, cast and creed, you are welcome to this place. In a culture where Gurus (teacher /mentor) are placed higher than the God, this place becomes more sacred as many Gurus stayed here meditating, preaching and healing every devotee. As per folk lore, other than the holy Gurus of Sikhism, Buddha also meditated somewhere here.  So, the spiritual vibes from this place transcend the time and ages and purify the mind and aura.

Three things intrigue me most about Golden Temple, 1st the Sevadars (volunteers) devoting themselves managing various duties such as managing kitchen, serving food, arranging shoes of visitors, washing utensils etc., 2nd the reverberating recitation of Guru Granth Sahib which make the ambiance pure and spiritual, and 3rd the holy langar – free meal service or community meal which feeds thousands everyday without any discrimination.

Amritsar is located exactly at the confluence point where Hindu and Islamic culture had the first meet. Golden Temple is the marvel of Sikh architecture which has taken best of Hindu Architecture and Islamic Architecture. First built in 16th century, it was brutally marauded by Afghan invader Abdali and later rebuilt by Maharaja Ranjit Singh in full glory with a golden dome gilded with 750 KG pure gold.

Sikh religion is the youngest major religion of the world which is yet to be understood. A few hours of visit to Golden temple makes you understand basic testaments of his religion. Irrespective of social and economical background, followers of Sikhism devote time and energy serving the visitors. Everyone is welcome to the langar i.e. the free meal service or community meal which is a common practice in Sikhism. The langar at this Gurudwara is one amongst the biggest and caters to more than 50000 visitors every day. Everyone has to sit on the floor in a disciplined manner and eat the simplest of food cooked and served by the Sevadars. The temple is just not a religious place but an affirmation and testimony to the creeds of Sikhism preached for centuries by Gurus.

For me, it is the place of complete tranquility and devotion offering hope and solace to millions of visitors.

This was my sixth visit to this temple complex and I decided to make an early morning visit and get lost with a goal to immerse myself in the sacred recitation of Gurugranth Sahib and feel the spiritual euphoria wrapped in the sound of faith. A mere walk around the pond uplifts the consciousness and enlightens the soul.

The best way to immerse is to sit next to the pond; see the fishes in ponds; observe the rituals being performed by visitors while bathing; relish the Karah Prasad (food of god); and at last savour the food at langar.

A Langar – where everyone is same and there is no discrimination

It was a cloudy morning when I visited the temple and photographer in me was elated to the core as I could capture Golden Temple in its full glory. 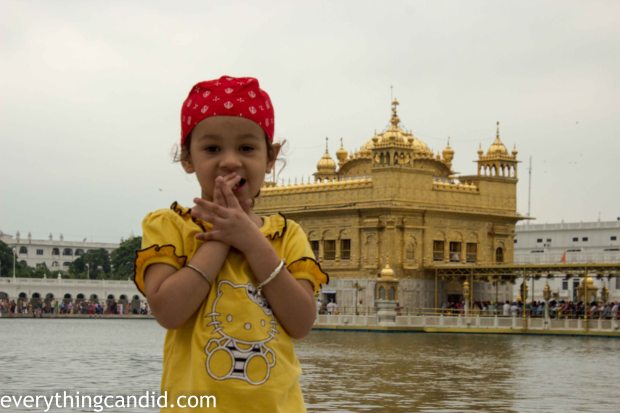 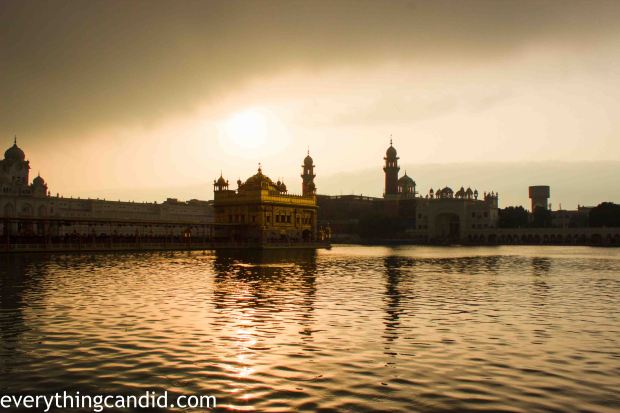 For me, Golden place is one of those places in India where i can go many times as it uplifts my soul, heals my cerebral wounds and make me one with the universe. For anyone planning to travel to India, Amritsar must be in the wish list to see the sheer confluence of spiritualism and religion.

Other than Golden Temple, Amritsar also has many things to do, see and experience. for a quick reference check out these things when in Amritsar –

If you feel motivated, please share this blog post with your loved ones so that they can break the mundane cycle of everyday life and explore the world.

16 thoughts on “Golden Temple in Amritsar – A Divine & Ethereal Experience”