Delhi has been my base for the last 8 years, however, first time I felt utmost regret on a December morning when I finally entered Humayun Tomb, an UNESCO World Heritage Site. I was awestruck with the unexpected, never-imagined-before grandeur and age’s old magnificent splendor of Humayun Tomb. The august feeling sent a shivering signal to my mind triggering regret for not visiting this historic place even once in last 8 years. 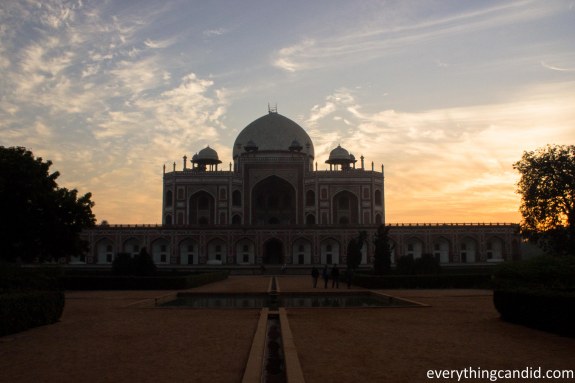 Thanks to Delhi Photography Club for forcing me out of my bed early on a December morning to capture this UNESCO World Heritage Site. Lately, after having read Alex Ruthorfords series of books on Moghul Empire, I have developed an urge to see Moghul Structures closely spread mostly in Delhi and Agra.

This tomb commissioned in 1562 by Hamida Banu Begum, is of particular cultural significance as it was the first garden-tomb on the Indian subcontinent.

Taj Mahal is believed to have been inspired from this tomb, which was, in turn, based on the tomb of Timur, an ancestor of the Mughals, which is located in Samarkand. Shahjahan build Tajmahal for his love of life and now Tajmahal has become the symbol of love for everyone across the globe, however, I feel Humayun Tomb is equally if not better suited for this stature.

Lets delve into history of Humayun and his second wife Hamida Banu Bagum who ordered this tomb to be built and was also the mother of Great Akbar. Their story of togetherness while in exile is far more moving and intriguing than the separation Shajahan felt after Mumtaj’s Death.

After loosing Delhi to Shershah Suri, Humayun and Hamida took many perilous jounrney across Thar Desert, Sindh, Afganistan upto Persia with a dual purpose of saving themselves from the wrath of Shershah Suri and also to gather support to conquer back what belonged to Moghuls. During these perilous Journeys in 16th Century, she gave birth to Akbar at Umerkot and they further undertook long journeys and considerable hardship to ensure safety of Akbar. Their story of 15 years in exile really has far more elements of emotions than so called Laila Majnu, Siri-Farihad, Romeo-Juliet. On account of this I feel Humayun Tomb deserve equal, if not more, attention than the Taj. And that’s why I believe Historian Laura Syke has described it as Masculine equivalent of Taj Mahal.

So when I entered this Mausoleum it was the perfect Golden Hour time and sun was yet to rise from the back of Tomb. The Chief Architect Mirak Mirza Ghiyas from Herak must have mastered the art of Geometric Symmetry as the entire tomb is a marvelous example of precision and symmetry. Mirak Mirza designed it in a Persian “Charbagh Style” or four sqaur garden style enclosed by high walls on three side and River Yamuna on the other. Like Taj, It has a high raised platform which gives a grand view to entire setup. A landmark in Mughal architecture, it set the tone for grandiose memorials and use of red sandstone in large scale construction.

Let, now,photographs do the talking,

It has four sqaure body at four side. The golden Shadow of Tomb is amazing.

Magic of Symmetry: Grand View from Second Corner as we move anti-clockwise from enterance. Sun is at the back. 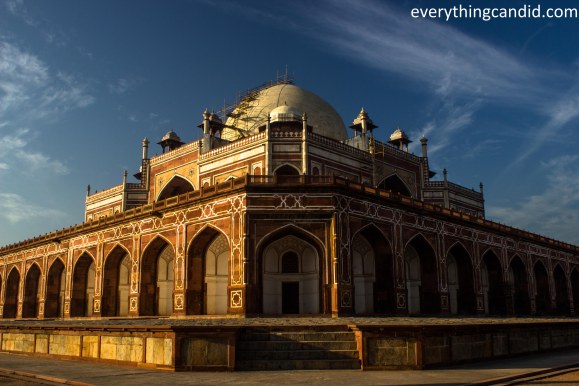 Magic of Symmetry: Grand View from Thrid Corner as we move anti-clockwise from enterance. 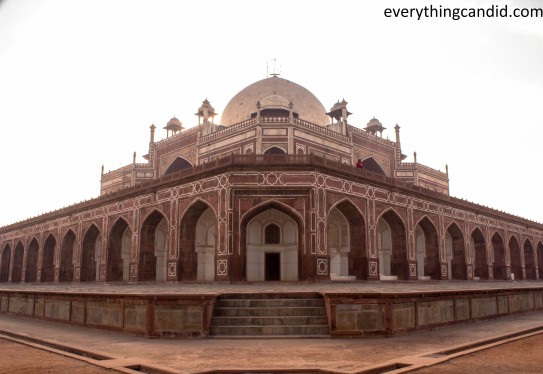 Magic of Symmetry: Grand View from Fourth Corner as we move anti-clockwise from enterance.

While capturing it from four corners, i was in awe with the change of color/hue in sky. Superb!!

Now lets move to first floor or on the paltform: 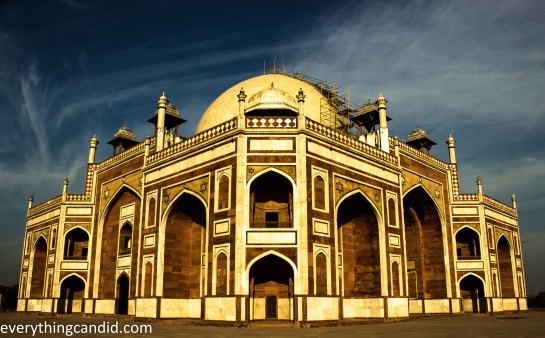 From Grand Paltform.
It gives better contrast than Taj with same splendor.

Historic Humayun Tomb!! Thanks to Moghuls for enriching India with so much!

Delhi has so much to offer to Heritage Walker and History lover!! Now would explore more of Delhi and bring it to you all!! Stay Tuned!!

Would love to take you on Photowalks and Guided tour to Delhi’s Heritage Sites and bylanes of Delhi. So, connect with me before you plan your next visit to Delhi.